Well, perhaps the literary quality of this piece will not be anywhere near Mrs Woolf who said, "a woman must have money and a room of her own if she is to write fiction" but alas, it's 5.20am and I have been up all night morning, so do bear with me while I bemoan the state of my room the desk space I share in the FAB UK office...
As some of you, FAB readers, are all too aware, we are wrapping up issue 5 of FAB due out end of March and hence, for the last two weeks we have been consistently eat, breath and live FAB; as Cindy has so aptly worded on her BlackBerry Messenger status, we can now "recite FAB magazine from cover to cover."
As a result of this overdose of FAB, ending in many a long day followed by many a sleepless night as we proof, adjust, reproof, readjust (repeat process), the mere semblance of life we manage to scramble together totally falls apart in the last few days and much like our font-filled, overworked brains, our desks also become a mish-mash of random clutter.
I will spare you the sight, FAB ones, cause it really is not for the faint hearted; instead I will give you a glimpse of my desk on a normal, no-FAB-overdose day. I can't help but agree with Mrs Woolf, but perhaps I won't go as far as "a room of one's own," and just settle for "a desk of one's own".
My desk on quieter days: 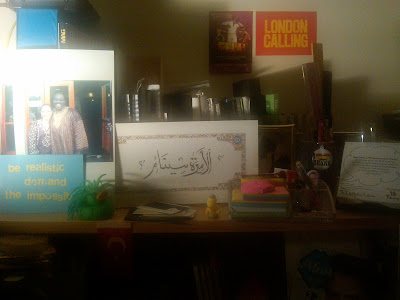 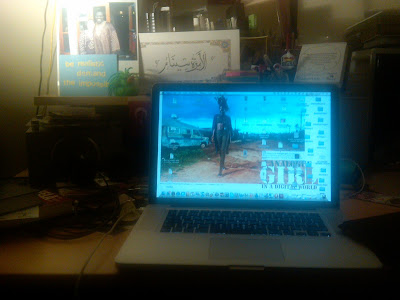 My laptop takes centre-stage most days - just like my desk, in the run up to print, my desktop is a cluttered mess as well as often feeling too lazy, I dump random images there. But you can still just about see Pepper's FABulous Ibadan shoot as my wallpaper which is a good thing (My wallpaper changes to a new shoot every issue).
Now let's have a look at what else is there on the shelf above my desk.
1.  A photo of me and Mr O, clad in trad at a friend's wedding back in 2003 which is what keeps me going even on the longest, hardest days. In April we will have been together for 10 years, and in May married for 5. In this day and age, where most couples file for a divorce faster than you can say "irreconcilable differences," for me, that's priceless.
2. A motivational - well, in my world it is, ok? - postcard I must have found in Paperchase a while back that reads, "Be realistic, demand the impossible."
3. My name in Arabic which I got calligraphed at the Moroccan stand at 2010 World Travel Market (Pretty cool really, you just tell the man your name and within three minutes, presto, your very own bespoke piece!)
4. A photo frame with a photo of my mum and dad from about 17 years ago - one of the happiest moments of my life I remember to this day. I was studying for my final exams one Saturday evening alone and frustrated after hours of memorising stupid dates and titles of Ottoman emperors when my parents strolled in - a little more than tipsy - singing and dancing to "Que Sera Sera" in the middle of my bedroom.
5. A left-handers' calendar - well, simply because as my maths teacher at high school said, "Left is the Hand of Genius". Need I say more?
6. A couple of postcards blue-tacked on the wall - I have a 'thing' for postcard - as by now you may have gathered - and I intend to put up a few more. The ones up there are a Paperchase postcard and the promotional postcard for the musical Fela! in London. 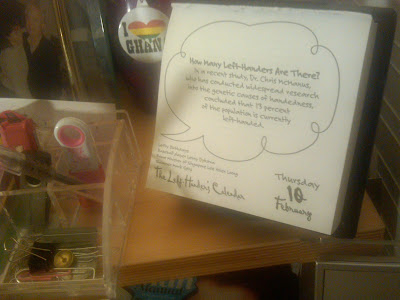 Under the shelf lies a bunch of knick-knacks including a box containing stationery (I love stationery!), a few CDs and a little Trinidadidan hut ornament Suby got given as a wedding favour some years ago. And of course, let's not forget the Turkish flag. You can take the girl out of Turkey... 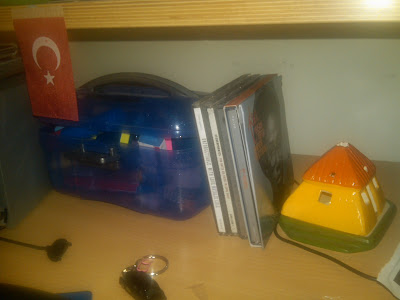 Two blue-eyed men I adore - conveniently hidden behind my laptop most days, much to the chagrin of Mr O. The one on the left hand, for many, won't need an introduction, I guess - Mr Robert Pattinson, aka RPattz. Don't get me wrong, I am not a Twihard; I only discovered the books in 2010 until when I used to often scratch my head trying to figure out why most women/girls/tweens were going on about Team Edward. Let's just say, you now know who my celeb crush is (Team FAB who have known all along are slightly critical of my taste in men and my sanity of mind, but they dare not say in so many words!).
The other blue-eyed wonder is Ataturk - translated literally as the Father of Turks - the victor of the War of Independence fought against the British, the French, the Italian and the Greek between 1919 and 1923, the first president of the Turkish Republic founded in 1923 and possibly the very reason why Turkey did not end up as yet another British colony after the fall of the Ottoman Empire. Needless to say, for any republican Turkish citizen, he is the ultimate Turkish hero. And yeah, needless to say, I am quite patriotic. 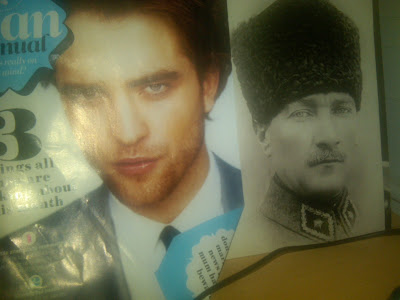 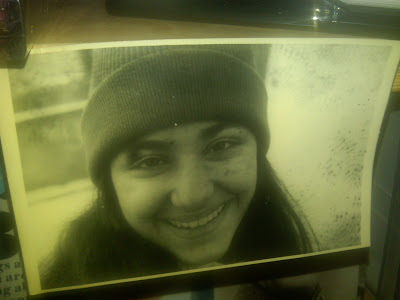 This photo was taken during the winter of my last year at high school on a cold, snowy January day. The reason it takes pride of place on my desk is simply because of the smile on my face - I had spent two months recovering from a ligament injury, the weather was ridiculously cold, the exams were coming fast and lose. Yet this smile seems to say, "To hell with it!" So when things get a little too much to handle, I look up and try to learn a lesson from my 17-year-old self. 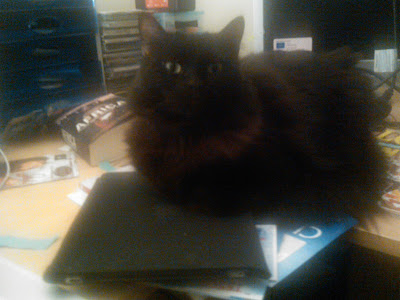 Yes, last but not least, Jazzy Fizzle, aka Jazz, who often plants his bum within the vicinity of my desk when he chooses to grace us, his minions, with his royal presence. Don't know what it is about writers; but we seems to be suckers for punishment for owning cats letting cats own us as most days it is often a battle to shift a cat's bum from where it is planted on your keyboard or notebook. As Exhibit A shows, Jazz is no exception. Fortunately, since, like most cats, he seems to have a strong case of ADHD, these periods of battling over material I need to write on are usually short-lived.
Okay... It's now 6.15am and I am still sat at a very cluttered desk of my own, with Mista Skee at the other end of Skype currently designing our latest covers (No, not giving you any clues as to who our cover boy and girl are, but get ready to be dazzled). As is oft the case, as the sky in the East turns a pinkish hue at dawn, I get ready to turn the lights off and make my way to bed - only to be back at my desk in about three hours' time...
Have a FABulous Friday, FAB ones!

OUR WORLD BEYOND FAB